It is all about free and equal access to information #eblidanaple2018

Af Michel Steen-Hansen maj 29, 2018
- as well as the ability to use it and learn to distinguish true from false, when libraries and politicians meet in Strasbourg in the next few days. It's all about Libraries... 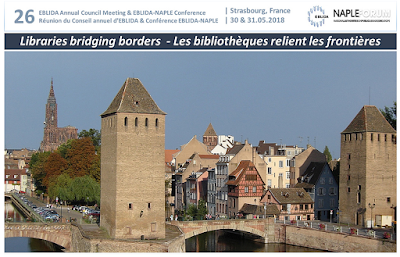 The title of the 26th EBLIDA Annual Council Meeting & EBLIDA-NAPLE Conference is "Libraries bridging borders", a theme that suits Strasbourg and the Upper-Rhine region perfectly, in itself an international place right at the heart of Europe. See more

We have also invited all the European MEPs to debate and drinks 16:00 on Wednesday 30th of May, at European Parliament in Strasbourg

Europe is at a crossroads in its history. Over the past couple of years, political tensions have risen among the citizens of Europe and globally. Governments throughout Europe have been taking various steps and measures to open or close down their borders to refugees.

Meanwhile, terrorism has had a huge impact throughout the continent, challenging the free circulation of people in the EU, whereas the development and spreading of Fake News is challenging how people are accessing information. At the same time, the mass digitisation of our world, and the advancement of the sharing economy is impacting the way citizens access culture and challenges the notion of borders itself.

There is a strong global demand from citizens for access to content anywhere any time. As Prime Minister Jüri Ratas (Estonia) mentioned in a declaration in February 2017 before Estonia took over the Presidency of the Council of the EU, “Striving towards a seamless physical and digital connectivity is in the interest of the whole European Union as economic success cannot be separated from the free movement of goods, services, people, capital, and knowledge”.

Libraries and librarians are increasingly working in an international and cross-border environment, be it related to countries, disciplines, preservation, knowledge, copyright or any of the issues in relation to free access to information. For free movement of knowledge to happen, we need libraries bridging borders.