Bringing Libraries on the agenda - a political Question

Today I make a presentation on the Pre-conference for Decision Makers at the IFLA President´s Meeting 2014 in Helsinki.

The title is "Bringing Libraries on the agenda - a political Question" It's a introduction to The Danish Library Association and its unique organizational structure that involves both politicians and professionals.

In the Danish Library Association we represent one of the more radical solutions to achieving this political approach to working for libraries: We have brought the political decision-makers and the library professionals  together in the same association. The President is always politicians and local politicians always constitute the majority.

Therefore, we have a constant dialogue between professionals and politicians about libraries. Not only the economy, also how they should be developed and which need citizens has.

And that's why it is difficult to make the political decision makers understand, promote and finance these changes.

That’s why we need to put the Library on the Political agenda.

In Denmark almost all the Libraries are funded by tax and all the libraries is free to use, In the way, that all the basis services are free of charge for the public.

We have 98 municipalities  and all of them are obligated, by legislation, to have a library and to finance it.

Some of the municipalities have more than one library. We have approximately 450 public libraries, to a population of 5,5 mil. people

We have 98 main-libraries and 350 smaller Libraries, some of them we call “open Libraries” it is term for a concept that allows users to access the library space in principle 24/7 and serve them- selves with loans and return materials. And use the computers, read or maybe even set up a meeting or an event, if the space allows it.

See: The development of ‘open library’ in Denmark

One of the reasons for the tradition bringen politicians and and the library professionals together  is that Denmark, got its first Library Act in 1920. When you have library legislation, which needs regular revision, you need to have contacts in the political system. Another reason is that the Danish public libraries gradually moved from state grants to local municipality grants, therefore it is necessary to links to the local politicians.

So we have to work with both the locals politicians and our national politicians
The legislation is made by the parliament, while the funding for the libraries come from the municipalities.

The Council elects from within its members an Executive Committee with ten members
including a president, who is always a politician, and two vice presidents, one of them is a library professional and one is a politician

So I hope we also in the future will be able to get this symbiosis to function and that local politicians want to put as much thought into the matter and will work in our board, like they do today.

Culture cannot just be defined by its contribution to economic growth and job creation. The concept of a creativity‐driven Europe only partially addresses the objectives of the EU strategy set out in ‘Europe 2020’. 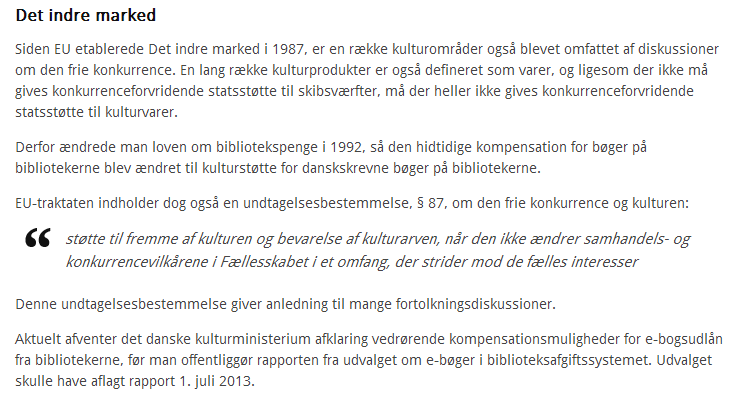 On the occasion of May 1st, I will write about equality and ensuring all people have equal right to information.

Yesterday I wrote about copyright law and the exceptions enable libraries to lend physical books to the public, the law just does not apply when the books are digital.

See: The future of books and publishing in a digital ag...


But unfortunately there are many opportunities to prevent libraries possibility of lending to the public.

I found an example of a digital material can not be borrowed at the library. Currently these are the works of Marx and Engels, therefore it is worthwhile to look at, just on Labour Day.

"In a capitalist world, even a radical publishing house devoted to the works of socialist thinkers has to make money to survive. That’s the argument being used by Lawrence & Wishart, a London-based publisher, to explain why it has asked the Marxists Internet Archive,a volunteer-run online collection of socialist writers’ works, to remove from the website copyrighted material from the publisher’sMarx Engels Collected Works by April 30.

The publisher says it wants to market a digital edition to libraries in order to keep itself in business. While the Marxists Internet Archive is not contesting the company’s right to enforce its copyright, news of its request set off an outcry from some observers and supporters of the archive.

"If Lawrence & Wishart still considers itself a socialist institution, its treatment of the archive is uncomradely at best, and arguably much worse; while if the press is now purely a capitalist enterprise, its behavior is merely stupid," wrote the columnist and critic Scott McLemee in an April 24 post on the Crooked Timber blog.

More than 4,000 people have now signed a petition on Change.org calling for an end to copyright on Marx and Engels’s work. "Privatization of Marx and Engels’ writings is like getting a trademark for the words ‘socialism’ or ‘communism,’" the petition says." 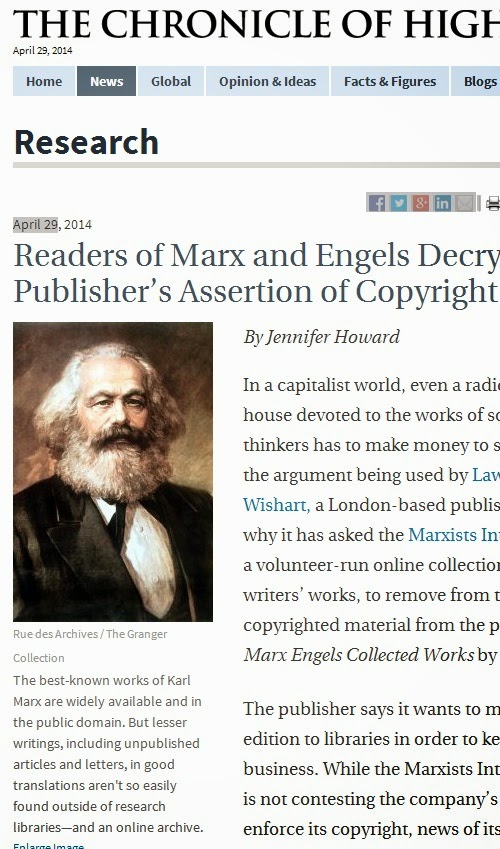 The article ends with an amusing observation

"Still, it’s "unfortunate that a left-wing publishing house would want to restrict access to the works of a major left-wing thinker to those affiliated with a university or college library that can afford to purchase L&W’s new digital edition," said Mr. Sperber professor of history at the University of Missouri at Columbia and a noted expert on Karl Marx. "Hegel, to name someone who was a big influence on Marx, once described a tragedy as ‘a conflict of two rights.’ That seems to sum up the situation."
Indsendt af Michel Steen-Hansen kl. 06.44 Ingen kommentarer: